died for your sins 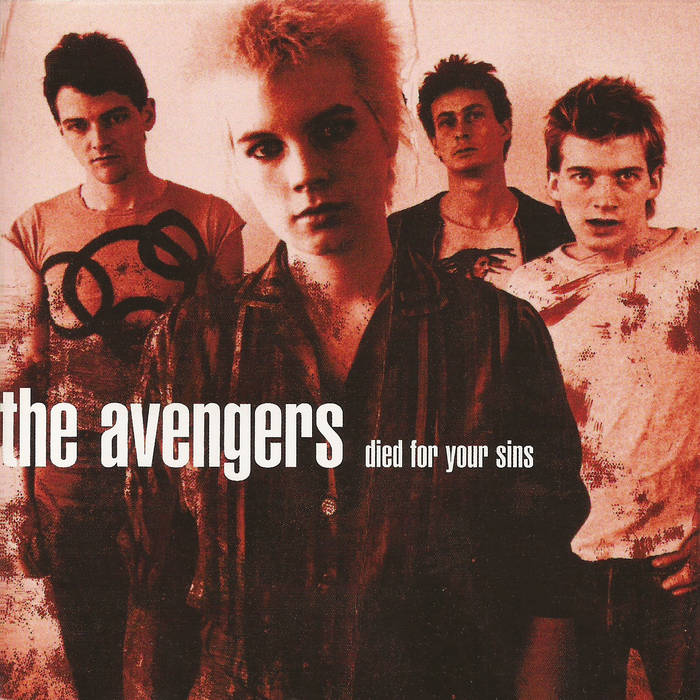 (from 1998)
A few years ago a small label called Really Fast from Sweden released a single with two Avengers songs taken from a tape that Danny Furious had. I remembered the day we recorded it at Iguana rehearsal hall with a stereo mic (which we thought was pretty advanced!) I recognized Teenage Rebel but the other song Friends Of Mine was totally new to me, even though it was clear that I was singing it and had written the lyrics. And it sounded pretty good. How many songs never made it to tape? How many lost to memory? I started collecting live shows to see what was out there.

My hopes in releasing this album were to bring to light some of the lost Avengers songs and give give a feeling of the wildness of the live shows.

What you're holding in your hands is mostly an archival set of field recordings. and we have the tapers and traders to thank for it's existence. Without them many performances and even whole songs would have disappeared without a trace. I had no idea that these recordings were out there floating around in the world and that with the internet and hours of word-of-mouth research they could be tracked down. Teenage Rebel, Friends Of Mine and The Good The Bad And The Kowalskis were from the Iguana rehearsal. The early version of White Nigger was demoed at Wally Heider Studios and is quite different from the one Steve Jones produced on the Avengers EP from 1979. It reminds me of how late I would wait to finish writing the lyrics before a recording session (once on the bus on the way there). Crazy Homicide, I Want In and The End Of The World were songs I did have lyrics for and really were finished, but only could be found on muddy live sets. Greg was excited about the idea of recording them and since Danny was in Sweden and Jimmy was incommunicado we put together the Scavengers with Joel Reader and Danny Panic (of The Plus Ones). Probably my favorite moment on this album is Greg's lead on The End Of The World which he remembered note for note for 20 years ago! We hope the purists will forgive us (or fuck 'em). The 2nd half of the recording is cut together from 5 of about 15 different live shows that I collected from the collectors. I don't remember a whole lot about them as I had a formula of three gin and tonics before hitting the stage, but I'm pretty sure the performer that played before us which I critiqued in Fools Or Hippies was a scruffy bearded hippie banging pots and pans. He later became the artist known as Zev. From listening to the live tapes I have to admit that harranging the audience was part and parcel of a Avengers show. People seemed to like it. If these songs sound blurry, ferocious, impassioned and slightly out of control, then they'll give you a little taste of what it was like at the Mabuhay Gardens in 1978. Wish you'd been there.

Well, you don't know what you want
working everyday in your restaurant
your life is slipping out of control
lose your job gonna lose you soul
now boy, young and white, so you wanna make it bigger
boy, you better watch your step, white nigger

When you were young you had such big plans
such big ambitions gonna be a good man
I say look at you now, oh what a coward
living your life but you don't know how to live

boy (little boy) young and white, so you try to make it bigger
boy, you just don't understand do you white nigger?

Crazy Homicide, Crazy Homicide (revolution)
you got nothing, and nothing to say
Crazy Homicide, Crazy Homicide (no solution)
don't give yourseves away
Track Name: The End Of The World
the end of the world
lyrics by Penelope Houston/ music by P. Houston, G. Ingraham, D. O'Brien, J. Wilsey
When I wake up in the morning
from this dream I'm having
going to give everybody the warning
I can feel it, I can taste it
yeah, the end is near
I watch as cities will tumble
I smell your rivers burn
old men, kneeling and humble
nothing left for you to learn, to yearn
the end is here

look down, your shadow's on fire
this day will blot out your past
no man can hold himself higher
with bones of dust to dust
I can taste it, now, it's here

And you all hold your breath
as you watch the last sun set
and your dreams will finally come
at the end, the end of the world

And we all hold our breath
as we're standing at the edge
and our dreams will finally come
at the end, the end of the world
Track Name: The American in Me (live)
the american in me
lyrics by Penelope Houston/ music by P. Houston, G. Ingraham, D. O'Brien, J. Wilsey

I want to upset you, want to make you think
but you eat all their shit
it makes your breath stink
gonna get a job and join a fucking union
that way, you know, nothing's gonna happen

Why did you leave me, where did you go?
knew this would happen and I told you so, but
you didn't listen to what I said
look at you baby, you lost your head

I dreamt you had a car crash
dead on the road with your head smashed
heard the news, can't be
how could you have done this to me?

Sitting at home all alone
I hear a voice on the telephone
telling me that you're dead
man, you lost your head