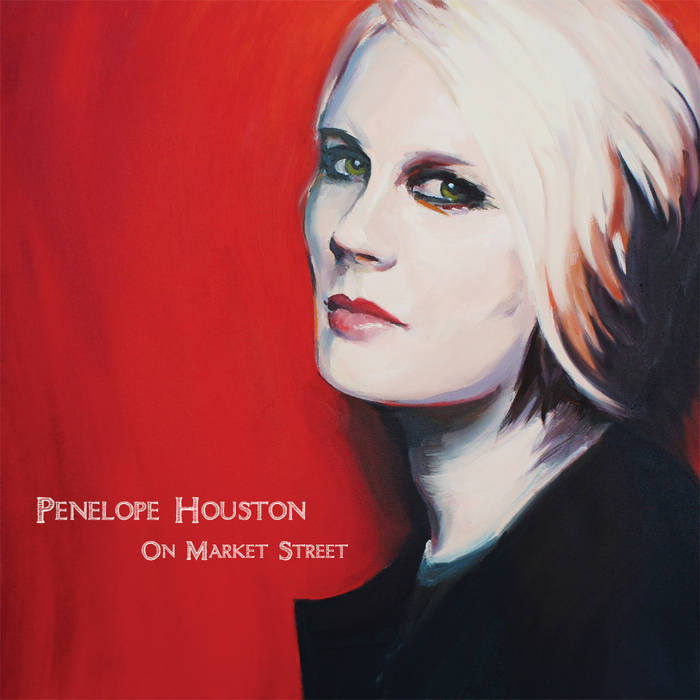 From the anthem "If You're Willing" these lyrics bring hope to everyone who has anticipated the next Penelope Houston album. On Market Street celebrates the musical re-emergence of a unique creative voice.

The seeds for this album were planted in October 2004. Bush was about to be re-elected. The Duelfer Report found no WMDs in Iraq. At the Hotel Atlantic around the corner from Hamburg's Knust club, Penelope was supporting the release of The Pale Green Girl, on a tour that became a respite from a poisoned marriage. As she watched the light of dawn breaking, words and music rose up in her mind like an apparition. "If you're Willing" signaled a new chapter for her, telling the story of the need for freedom and self-expression in both personal and political life. In the weeks that followed a tumultuous mix of desire, betrayal, guilt, and heartbreak inspired the kernels of many more songs.

Penelope's next years were momentous – divorce, independence, a notable lawsuit involving her proto-punk band the Avengers, a return to university, and nine Avengers tours. Throughout this intense period she continued to sharpen her message in songs that demanded declaration. Finally on a summer break Penelope booked time at the San Francisco Bay Area's prestigious Fantasy Studios (home to major artists from Sonny Rollins to Green Day to Joanna Newsom). Here she gathered a team of studio veterans familiar with her vision, and On Market Street was born.

Penelope and her co-producer Jeffrey Wood (Housemartins, Luka Bloom, Giant Sand) worked closely with longtime collaborator and guitarist, Pat Johnson, to shape these personal songs into epic musical narratives. With the rock solid foundation of drummer Dawn Richardson (4 Non-Blondes, Tracy Chapman) and the gilding Hammond B3 organ of Danny Eisenberg (Tift Merritt, Ryan Adams, Jonathan Richman), they created a sweeping backdrop for "If You're Willing," "You Reel Me In," "Missouri Lounge" and Johnson's hymn to forgiveness "Come Back to the Fountain." These tracks make up On Market Street's folk-rock backbone with natural reflections of The Band, Let it Bleed-era Stones, and an Americana edge recalling Lucinda Williams by way of Memphis.

Stepping a little to the left of the familiar, Penelope enlisted the stalwart Steven Strauss to compose Van Dyke Parks-ian string quartet parts (led by Julian Smedley who has played with Vivian Stanshall, Anthony Braxton, and Dan Hicks) to burnish the poignant "Meet Me in France" and "Winter Coats." Strauss, unafraid of Penelope's sometimes-unorthodox musical structures, adds grace to these dark, poetic and complex heartbreakers. It's not all gloom and doom, though. Giving us some lighter moments are the frisky "Scrap" and "USSA," a humorous wordplay on Cold War era consumerism.

Just two days prior to entering the studio, Penelope composed her most moving ballad of social injustice, the title track "On Market Street." Bare and haunting with an eerie bed of Mellotron, the song spotlights her voice, now life-honed to an instrument of strength and fragility. When asked about her decade-long work at San Francisco's inner-city library, Penelope told Devoted Ruins, "My contacts with people living downtown on Market St. have made me examine the ideals and beliefs of our society, our religions. I'm voicing the questions anyone would ask of a just God, if their eyes are open." The circle – started seven years ago with "If You're Willing" – was suddenly complete.

Lush and literate On Market Street is the ultimate Penelope Houston album, a pinnacle of songwriting, performance, and fidelity that secures her place in the hearts of her fans and music lovers around the world.